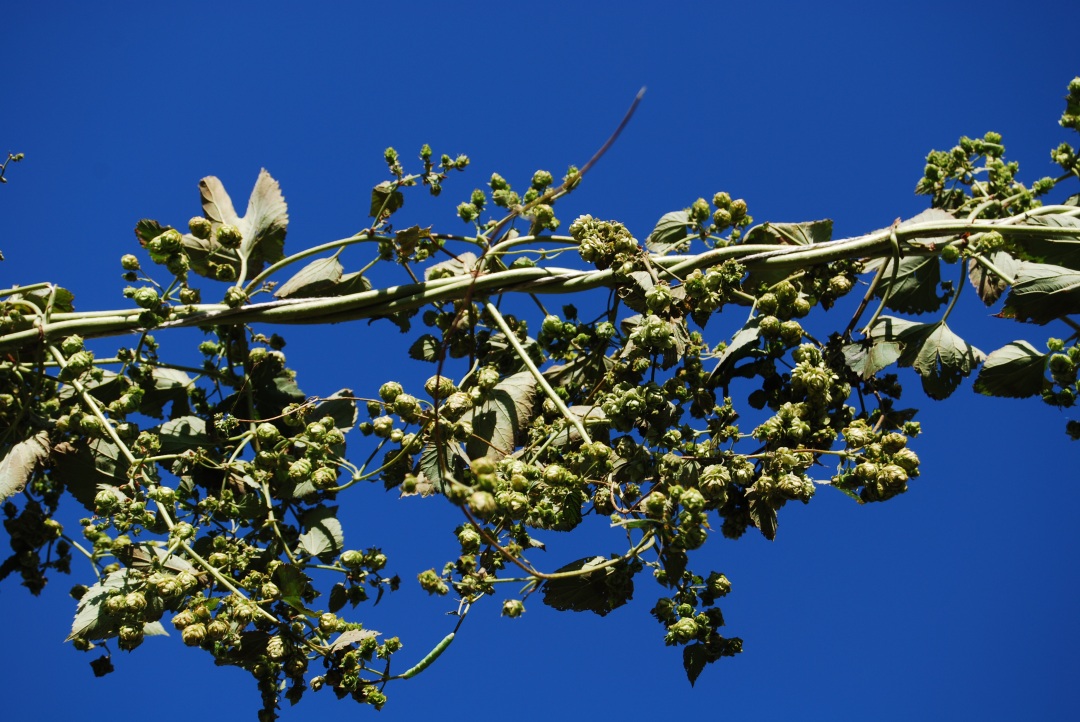 Hops (between) hopes and fears

This post is about hops, those that brewers harvest but it is also about the hops we experienced in the past two months between feelings of fear and hope.

Autumn has practically arrived at the doorstep and has fooled us with long spells of heat and sun just before it came knocking at our door. I think we knew it was coming and felt it creeping. A frantic two month of last minute preparations was accompanied by the silent awareness that our time is running up before the sun goes away and prevents us from working outdoors. Our last August-September efforts included: closing up the old chimney in the kitchen, finishing up the classrooms, painting the kitchen walls and window bars as well as the inner windows, putting sealant around the window frames, collecting wood for the fire and finally connecting the remaining wood burning stoves to the chimney.

This transition time between summer and autumn is also when the aroma of the hop flowers are at their peak.

For a homebrewer, this is a reason to hop around the garden with joy. Alas, I’m still learning what’s the right time to pick the cones. Too early will lend some grassy flavours to the finished beer.

Too late, and I’ve lost the season’s harvest. Rubbing the cones between one’s hands releases the familiar aromas of an IPA. This year I harvested two varieties: Cascade (the American variety that is so fruity to the smell) and Brewer’s Gold which lends a great balance between mild grass and fruitiness. 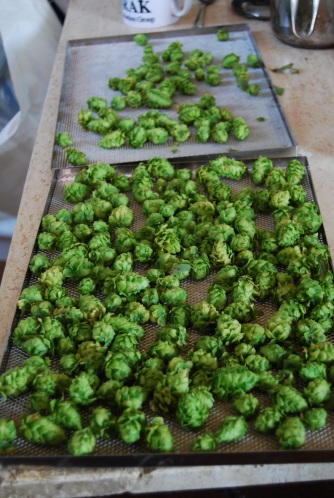 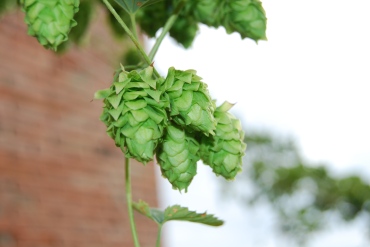 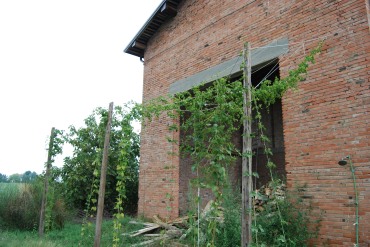 Our main task in the past two months was starting up the teaching activities and getting enough students to enroll in the English courses. It feels like that the entire ‘The Old Stable’ project relies on us being able to work from home. It’s only in that way that we would be able to spend time with the kids, manage the garden and hold social and cultural activities in a sane manner. Up until now, it was the sweet part of starting something new, throwing ourselves to the wild and hoping it all works out with the important difference that we had enough backup funds to get us going. It was the fun part of being a builder, carpenter, decorator, gardener and headmaster without being stressed about income. Now it’s time to live up to our own expectations and make our dreams a working reality.

We designed our courses and tried to work out what was the best strategy to pitching up activities. We might have started too slowly. We advertised via friends and Facebook with only a few visits to the nearby schools handing out leaflets. Now the ‘academic’ year has started and we are far from filling up our courses. In fact, we are feeling a little on edge. We even started having doubts that we would be able to afford the kids’ music lessons, the one and only outsourced activity that the kids are involved with. Welcome to the life of being an independent! I feel a little embarrassed to share my worries as it was definitely expected and for the main part there are plenty of people out there that deal with this feeling yearly and here I am complaining after years of being spoilt, earning a monthly income without having to care about its actual source.

Putting aside the economical worries associated with opening one’s own business, the political atmosphere in Italy, particularly in the area of immigration has started to become quite toxic. As much as people ridicule Salvini’s actions and discourse, his speech has infiltrated the mainstream conversations and allowed those with xenophobic ideas to feel free to express their views. In fact it were Italians votes that got Salvini into the government. If not just sadness, these developments evoke fear that a very bad time is approaching. Being brought up in a family that suffered losses in the holocaust I only think of the worst to come. This time it’s not the Jews they are after, but I still have this sensation that I can’t trust the people around me. what do they really think? and on which side will they be when the time of truth comes?

On the other hand, good things happened too, and maybe not surprisingly we wanted to make the most of the little opportunities and positive ideas that came along. It started with Elena being invited to participate in a small weekend festival in Brisighella devoted to environmental and social issues. The focus this year was on reducing waste at home. Elena was invited to talk about our experiences as a zero-waste family without a car. We were hosted by a very nice family and got to meet people that were like minded, interested and wanted to do something. This already brings a bit of hope. We came back full of energy to be more active on the bicycle issue. Elena has kept on creating contacts in the last couple of months and has become an active member of the ‘Legambiente’ in Nonantola. I’ll let her write about the ‘Nappy library’ and the campaign that is running to complete the construction of a bicycle path connecting Nonantola and Modena. She has quite a lot on her plate and can guess that this gives her something to hold on to and hope that good things will come out of it soon.

As for me, in the last month I got in touch with ‘Anni in Fuga’ of Nonantola, an association devoted to helping the local community of refugees in their daily tasks and integration. I was hoping to offer some space and ideas to arrange cultural exchanges especially around music at The Old Stable. Although it’s still early ideas I got a warm welcome and the members seemed interested. By chance through our violin teacher in Bologna I got to participate in a three day course run by Musicians without Borders and Musicians for human rights which really blew my mind. It was great meeting other people that wanted to do something too. I’ll have to write about this later and more lengthily, it’s still early times but there is a feeling that we are getting towards realizing some of our ideas.

We’re still slow with our tiny business but know very well that it is a matter of determination and patience.. all to come in good time.

So in summary, two months and a half between hope and fear, lots of hops in between.
I hope updating with our social activism soon. Till next time.

I'm Barak. You'll find me running: around, in and out of The Old Stable. Hopefully preparing some beer, talking to friends or doing something exciting. View all posts by Barak Aaronson

One thought on “Hops (between) hopes and fears”

Dove Siamo/Where to find us